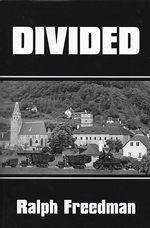 A World War II era novel about love, betrayal, honor and loss, Divided focuses on a small Austrian town in the tension-filled days between the German retreat and the Russian occupation. A small unit of American intelligence agents try to root out the remaining Nazi sympathizers and prepare the town and themselves for the changes peace will bring.

Divided goes back to the last days of the Second World War, just as do its contents. I conceived of the story while I was serving with a group of counter-intelligence agents after the end of the actual fighting.

The story haunted me and the moment I was discharged from the army, I began to write the book…As the author at two moments of my life: ages 28 and 92, I hope to speak to both ends of my generation in helping to explain the world we live in.  —Ralph Freedman

“…Divided is the first novel recommended by The Reserve Officer —with no holds barred as to its excellence in treating one of the most dramatic situations in history. Against the tense background of fear and internal division that dominated post-war Kleinbach, a small Austrian town occupied by the American Army, Ralph Freedman has projected this powerful book. Divided…wins ROA’s recommendation as real good reading for every officer of the Armed Forces.”  —The Reserve Officer, September 1948

Divided is available through Amazon.com and Barnes & Noble.