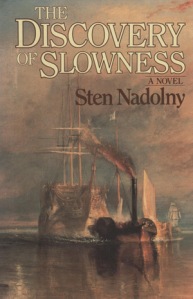 The Discovery of Slowness

This novel is based on the life of the 19th century English explorer, Sir John Franklin, who attempted to find the Northwest Passage and paved the way towards its ultimate discovery.  In the process, Nadolny traces not only the life of this distinguished explorer but, through him, the expanding world of the British Empire during the late18th and 19th centuries in the oceans as well as in the colonies.  Following a stint as governor of Tasmania, John Franklin perished in a final attempt to secure the Northwest Passage for which he had aimed all his life.  The translation, originally published in 1987 by Viking, was republished by Canongate (Edinburgh) in 2003.